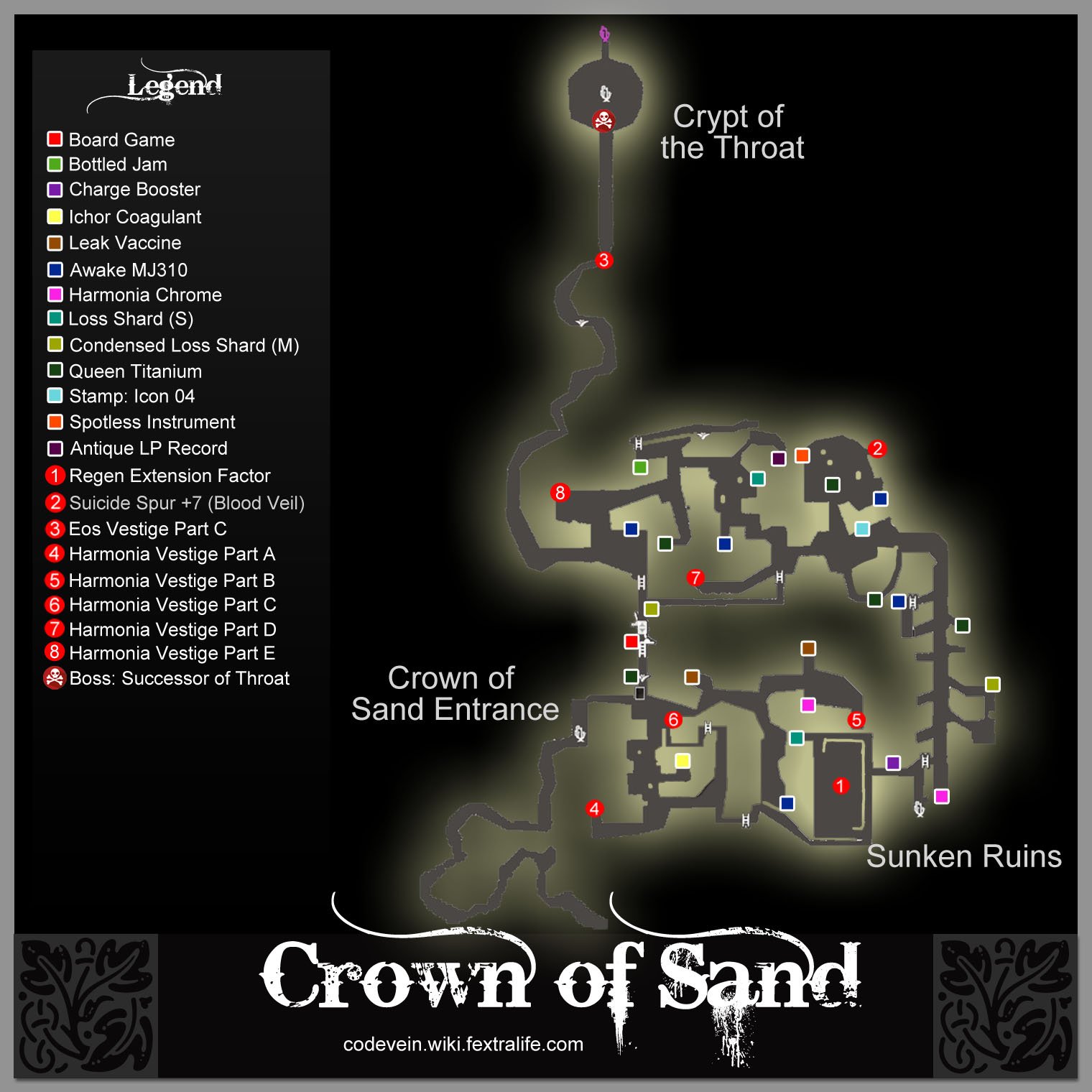 After the fiery battle between the Successor of the Claw, the party successfully restores Emily's memory. The party encounters Juzo Mido and learns from him that Eva is in danger and sets out to rescue her.

Finding the Crown of Sand

The journey continues after the battle with the Successor of the Claw and encounter with Juzo Mido and the objective is to head towards Eva's location which is the Crown of Sand.

To reach the Crown of Sand, teleport to the Iceless Falls Mistle at Ridge of Frozen Souls then make a left towards a caved path. Kill the Mutated Urchin that's along the path and go right that will take you to the inner section of the caved path - eventually, you'll reach a couple of ladders that you'll need to climb down until you reach the path that leads to the entrance of the Crown of Sand.

At the Crown of Sand Entrance Mistle, you'll find Jack and a cutscene will trigger - activate the Mislte once you've regained control of your player.

From the Mislte, head down and make a right. You'll encounter your first enemy for this location, a Parched Executioner. Their attacks inflict Leak if you are hit multiple times which causes your Ichor to drain quickly without using it - there's a couple of these executioner's along the way, so kill them and just head straight towards the dead-end.

When you reach the end, go right, through the sand, and you'll find a Vestige, Harmonia Vestige Part A - another Parched Executioner will appear from behind when you pick up the vestige.  Be warned, the sand here (and found throughout this map) will not only slow down your movements, but also slowly drain your Ichor as if you were inflicted with Leak (currently there is no known way to prevent this, if there is any).

Next, head back and go towards the path that's on your right. You'll encounter 2x Mutated Lost and a Monk Mutated Lost that's sitting by the boxes

You'll find yourself in a section that has a sandpit below you and 2x Parched Executioners patrolling the area. Fight your way through the executioners, head down the sandpit and pick up 1x Regen Extension Factor that's on the middle of the pit - as soon as you pick up the item, a group of Parched Blob will emerge from the sand to ambush you. (Similar to the executioners, they're attacks cause Leak once the gauge becomes full from taking multiple hits.)

After acquiring the upgrade, head back to where the ladder is and jump down to the path as indicated on the image above. There's 2x Mutated Lost ahead and another Parched Executioner below you, so use the opportunity to ambush it by attacking from above.

You'll encounter an Elite Parched Executioner with red spikes on its back. This enemy has agile attacks which cause leak and paralysis if you are hit multiple times, so be cautious when facing this enemy.

After killing the elite enemy, you'll find the vestige it was guarding around the corner which is Harmonia Vestige Part B.

Once you've obtained the vestige, head back to the section that has a large sandpit where you acquired the Regen Extension Factor and jump down the path as indicated on the image above, you'll find the Sunken Ruins Mistle there.

After activating the Mistle, climb up the ladder to reach the next section, there's 2x Harmonia Chrome that you can pick up on the right side but be cautious since huge boulders will start to be thrown at you by the Parched Executioner at the top once you pick up the item or try to head up the path. You can avoid this by running towards each corner but there are enemies waiting on each side waiting to ambush you, the executioner will stop throwing the boulders and will fight you once you reach the top - make sure to check every corner since you can pick up a few items.

You should find yourself at the top of the desert-filled ruins. As you approach the ledge, a Mutated Lost and Monk Mutated Lost will climb up to ambush you alongside an Axe-wielding Lost. Kill the enemies, then go around the left side where you'll find 1x Queen Titanium.

Next, head to the middle of the sandpit. You'll find a Rooted Lost and a Parched Blob will emerge from the sand to ambush you - as indicated on the image above, you can find Stamp: Icon 04 next to the corpse of a Lost.

After acquiring the item, take the path on the right side where you'll find another Elite Parched Executioner patrolling the section - kill it to obtain a decent amount of Haze, 1x Harmonia Chrome, as well as loot where you can pick up 1x Spotless Instrument, 1x Awake MJ310, and also a chest containing 1x Suicide Spur +7.

Once you've cleared the section, go back to the sandpit and take the path to your right where you'll encounter more Rooted Lost - there's a ladder to your left, so go down it first to open up a shortcut leading to the Crown of Sand Entrance Mistle.

The path below is pretty straightforward, so just go straight until you reach a lift. Ride it all the way down and you'll find yourself at the other side of the locked gate near the Crown of Sand Entrance Mistle - pick up the 1x Board Game near the ladder that's on top of the supplies, purify the Rotten Mistle, pick up 1x Queen Titanium near the gate, and then unlock the gate to open up the shortcut.

After that's done, head back up to the top of the ruins then make a left. You'll encounter 3x Rooted Lost and another vestige at the end, Harmonia Vestige Part D.

Next, head back to the pit and take the other path that's also on the left. You should find yourself in another open area that has a dried-up tree in the middle of the pit and glass capsules by the side. Go straight and go right around the corner towards the stack of boxes - break it and you'll find 1x Antique LP Record behind the boxes.

Now, at the same spot, walk up to the ledge and drop down onto the path below. You'll find another Rotten Mistle and a Suicide Lost guarding it, kill the enemy and purify the Mistle to map the surrounding area.

Once you've purified the Mistle, climb up the ladder ahead and you'll find 1x Bottled Jam on the ground as indicated on the image above.

From here, go around the corner where you'll encounter more Parched Blob and a Parched Executioner. Fight your way through until you reach the section that's indicated on the image above - you'll notice another executioner that's sitting next to a vestige, kill it then pick up the Harmonia Vestige Part E.

Next, from the vestige's location, take the path on the right, and go around it where you'll encounter an executioner sitting by the edge as indicated on the image above. (there's a ladder that you can find before approaching the enemy, make sure you kick it down to open up another shortcut to the Crowd of Sand Enterance Mistle; with a route that can lead you to the lift from before, which takes you to the gate near the entrance) - the path ahead is pretty much straightforward until you arrive inside a caved path leading to the crypt of the next successor.

Along the way, you'll find a rotten mistle and Themisto by the entrance. Purify the mistle then speak to Themisto to restore the Harmonia Vestiges - make sure you've restored all of the Harmonia Vestiges that you can repair before fighting the boss. Revisiting the area after the boss fight, Eos Vestige Part C can be found here.

Successor of the Throat

Once you've restored the vestiges, proceed further into the crypt and a cutscene will trigger before facing the Successor of the Throat

To learn about the strategies on how to defeat this boss, you can click here. Defeating the boss rewards you with 102,060 Haze.

Another cutscene will then follow and you'll teleport into Eva's memories to find her. As mentioned, if you were able to restore all Harmonia vestiges, you can restore her memory and save her. Eventually, Jack will take you to a Mistle that will teleport you to the next location: Crypt Spire - you'll also acquire the Harmonia Vestige IV which will allow you to use Eva's Blood Code, Harmonia, and Jack, as well as Eva, will be added to the companion list.