Depths: Swirling Flood is a Location in Code Vein. This cavernous depths location is only accessible via the Depths exploration menu by talking to Davis, and players must obtain the Map: Swirling Flood first before speaking to Davis - to obtain the map, speak to Shang located at the Outer Crossroads of the Ruined City Underground. You'll have to complete his gathering side quest first before obtaining the map. 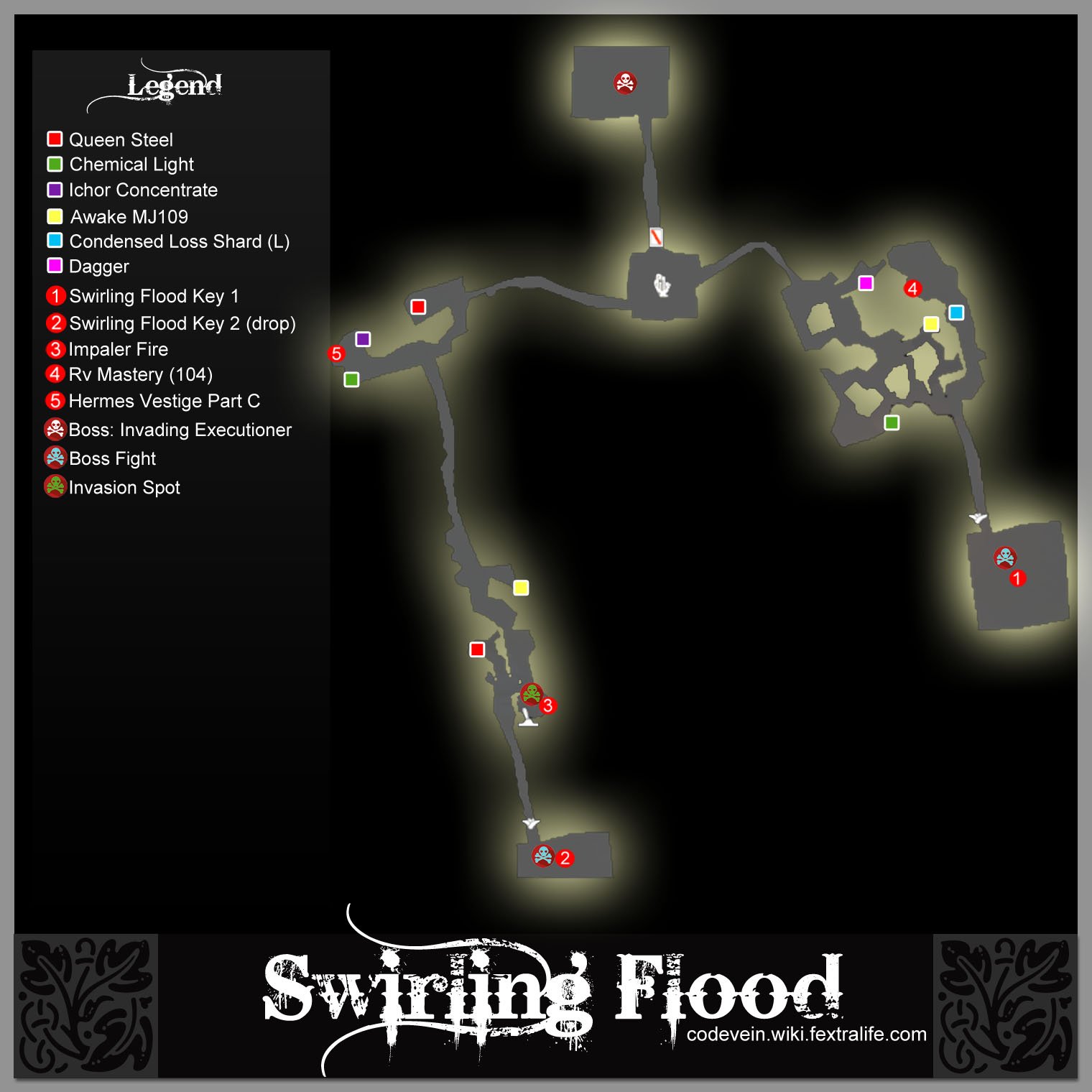 The Swirling Flood is a depths location unlocked after obtaining the Map: Swirling Flood that is given by Shang after completing his gathering side quest. Players can talk to Davis to enter the area.

Upon arriving, activate the entrance Mistle to map the surrounding area. There are two paths that you'll have to explore in order to get two keys. First, open your map and take the path on the right side from the main boss arena.

At the end of the entrance of the path, make a left and you'll find a flight of stairs where you'll encounter an Elite Knight Lost and an Ant-Type Executioner. You'll be able to loot 1x Unique Materials, 1x Condensed Loss Shard (L), and 3x Dagger. Next, head straight and drop down to where a Glowing Tentacle Lost is, kill it for a chance to obtain 1x Plasma Cartridge and also pick up the RV Mastery (104) that's on the ground.

Next, continue straight until you find a path that's lit by a purple-colored lamp. You'll find a mini-boss arena and a rotten mistle at the end. Now fill the two elite versions of the Mutated Sea Urchin called "Ghastly Fresh" to obtain 966 Haze and the Swirling Flood Key 1 - retrace your steps back to the entrance mistle after the battle

Now, take the next path from the entrance mistle then check the right side first where you'll encounter another Ant-Type Executioner patrolling the section, it may drop an Ichor Concentrate and there's also another that you can pick up near it. Next, continue to the opposite side where you'll find a Mutated Sea Urchin and another Ant-Type Executioner, keep going straight where you'll find a lever and a chest above. You'll obtain 1x Impaler Fire in the chest and will trigger the trial of blood once you open it - after completing the trial, head down and take the unlocked path next to the lever which leads to another rotten mistle and mini-boss-arena.

For this battle, you could either face two elite Ant-Type Executioner or Glowing Tentacle Lost. Whichever the case is, killing the two enemies rewards you with 1612 Haze, 1x Queen Steel, and Swirling Flood Key 2 - after the battle, retrace your steps a bit and search the corners of the section to find Hermes Vestige Part C, then head back to the entrance mistle and use the key to open the locked door.

The boss that's waiting behind the door is the Invading Executioner, you can click on its name which is linked to the page to learn more about the strategies on how to defeat this boss - successfully defeating this boss rewards you with 4479 Haze, 2x Awake MJ109, and 2x Queen Steel.