Depths: Void District is a Location in Code Vein. This cavernous depths location is only accessible via the Depths exploration menu by talking to Davis, and players must obtain the Map: Void District first before speaking to Davis. To find the map, it's located in a room full of wooden boxes and glass capsules in the Provisional Government Center - you'll find the map behind the glass capsules. 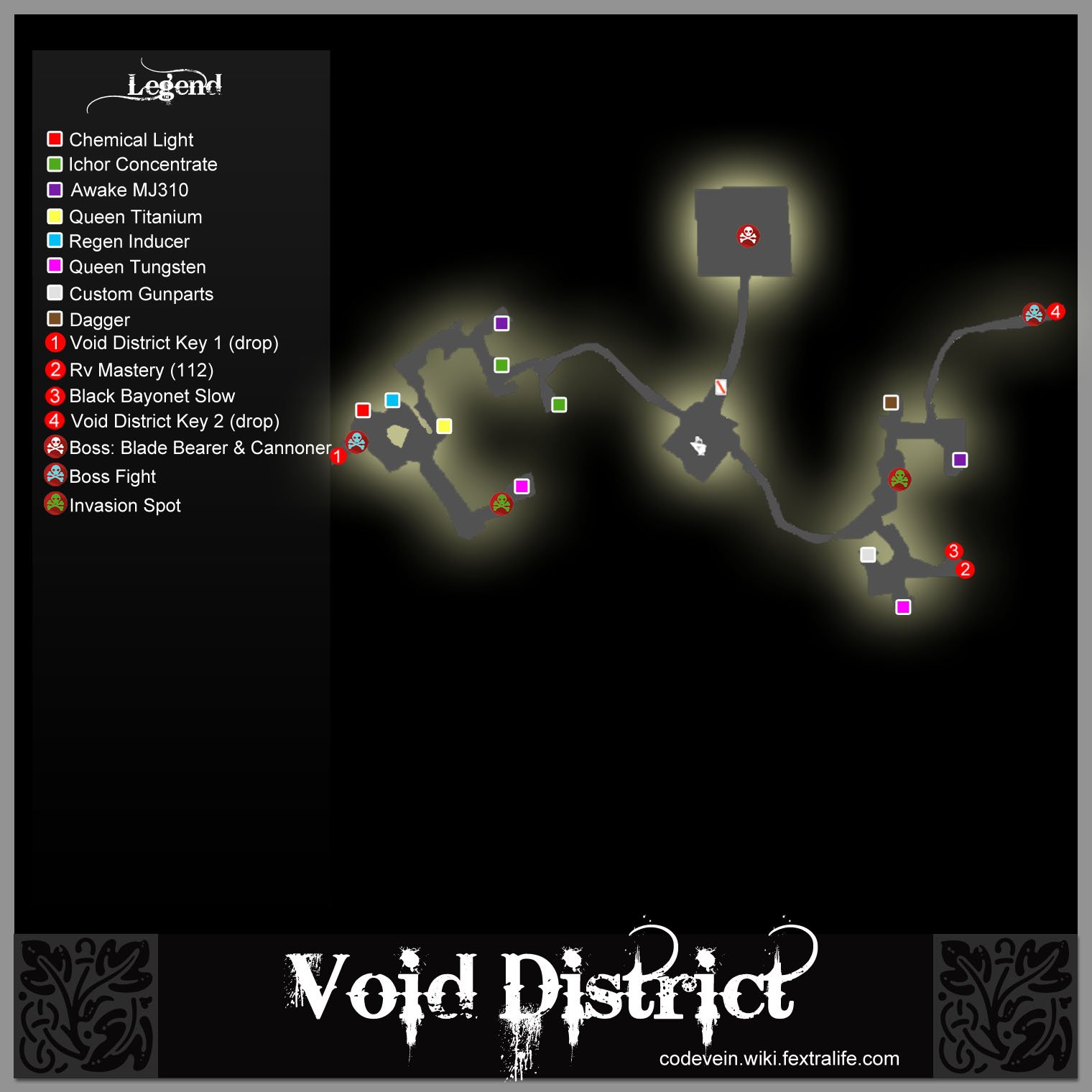 The Void District is a depths location unlocked after obtaining the Map: Void District found inside a room full of glass capsules and wooden boxes at the Provisional Government Center. Players can talk to Davis to enter the area.

Upon arriving into the depths, activate the entrance Mistle to map the surrounding area. Take the path to your right where you'll see red lamps, you'll encounter two Sword-wielding Lost and an Armored Female Lost in that section. From where the two Sword-wielding Lost was standing which is on the right, you'll find a Queen Tungsten and 1x Custom Gun Parts nearby while from where the Armored Female Lost is, there's a Rv Mastery (112) and a chest containing 1x Black Bayonet Slow.

After acquiring the items proceed further and the trial of blood will trigger, after completing the trial, continue further and you'll find a rotten mistle and a mini-boss arena at the end. Here you'll fight the Cannoneer and an Argent Knight Lost. Defeating the boss rewards you with 31219 Haze, 1x Awake MJ310, and the Void District Key 2 - head back to the entrance mistle after the battle.

Once you're back, take the opposite path where you'll encounter a Stone-Crusher guarding 1x Ichor Concentrate, kill it for a chance to obtain 1x Queen Titanium and to pick up the item it was guarding. Next, head down the stairs then pick up another Ichor Concentrate beside it, you'll encounter a Bayonet-wielding Lost and a Sunset Axe-Wielding Lost here.

As you continue further, there will be another Bayonet-wielding Lost and 2x Monkey Lost that will attack you. You'll find yourself in another section where Mutated Hounds are patrolling the area, clear the section then loot it to find 3x Chemical Light and 1x Regen Inducer. Once that's done, you'll find another path that has red lamps, take that path and you'll find another rotten mistle and a mini-boss arena at the end. You'll face the Blade Bearer and an Argent Knight Lost, defeating her rewards you with 31219 Haze and the Void District Key 1 - retrace your steps back to the entrance mistle and use the keys at the locked door after the battle.

Upon opening the locked door, you'll find the main bosses for this dungeon are the Blade Bearer and the Cannoneer, you can click on its name which is linked to the page to learn more about the strategies on how to defeat these two - defeating them rewards you with 2x Queen Tungsten, 2x Awake MJ310, 52033 Haze, and one, awesome, Mark of Honor!