Depths: Misty Ruins is a Location in Code Vein. This cavernous depths location is only accessible via the Depths exploration menu by talking to Davis, and players must obtain the Map: Misty Ruins first before speaking to Davis - you'll find the map at the first section of the Crypt Spire, you can check the detailed guide on where it is found by clicking here. 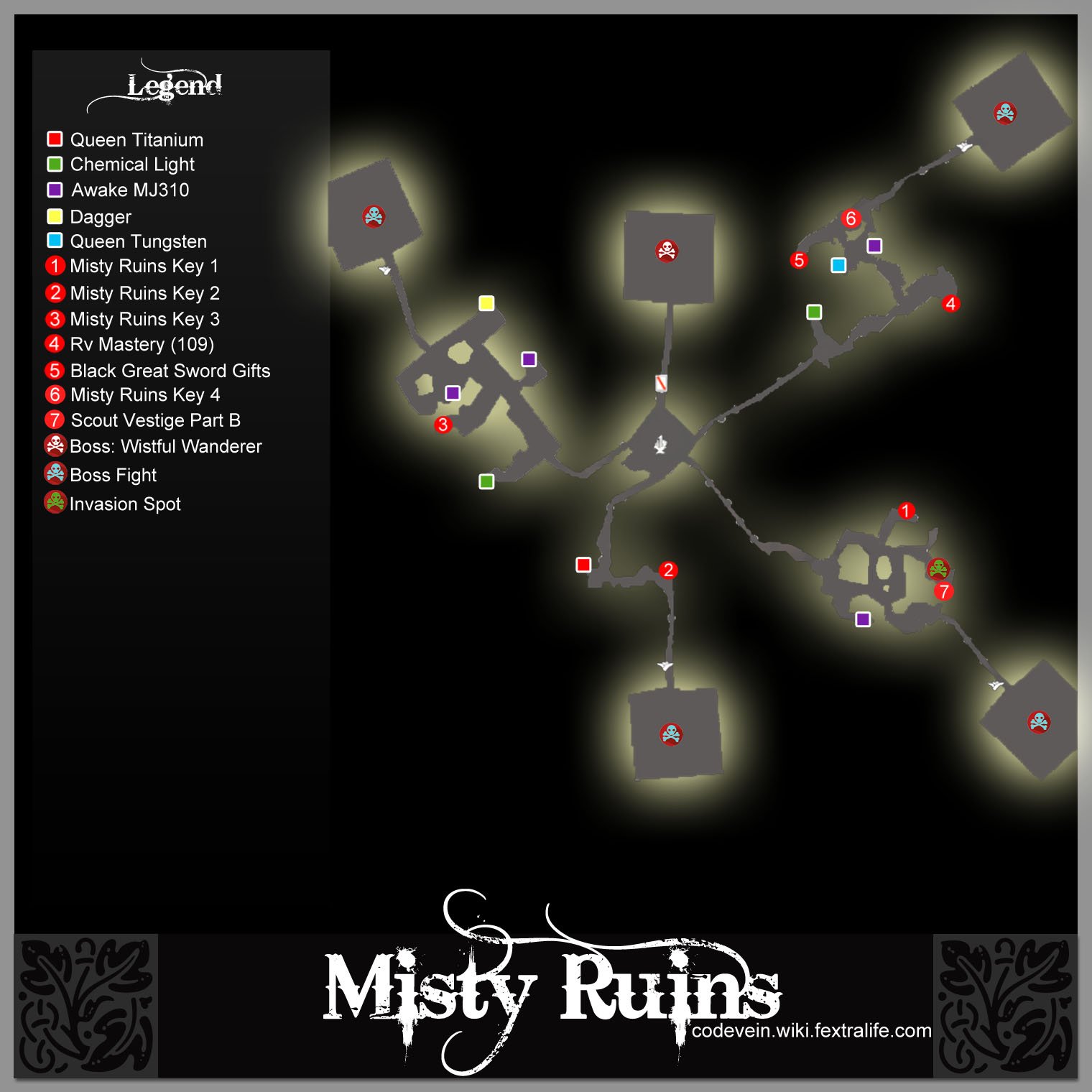 The Misty Ruins is a depths location unlocked after obtaining the Map: Misty Ruins found in the first section of the Crypt Spire. Players can talk to Davis to enter the area.

Activate the mistle to map the surrounding area, then take the path that's on the right. Go straight then make a right to find a Parched Executioner at the corner, kill it then pick up 1x Awake MJ310 that's next to it. Continue going straight then you'll encounter two more that are patrolling the area. Keep going straight and you'll find a rotten mistle and a mini-boss arena at the end. Here, you'll face an Elite Parched Executioner called the "Dusty Cloud Bandit" - killing it will reward you with 12247 Haze. Next, retrace your steps and approach the Parched Executioner that's guarding the key, kill it then pick up the Misty Ruins Key 3 - head back to the entrance Mistle after obtaining the key.

If you continue ahead, there's a rotten mistle and another mini-boss arena where you'll face an elite version of the White Ant-Type Executioner called the "Thirsting Slaughterer" and two Fire Totem Lost, killing the main enemy rewards you with 11428 Haze and drops a Queen Titanium - head back to the entrance mistle after the battle and take the last path to find the key.

The section for the next path is a bit wide, but you'll find the Misty Ruins Key 1 at the corner left side of the section. And also, you'll find the Scout Vestige Part B which triggers the Trial of Blood. After surviving the trial, head further into the section where you'll find the last rotten mistle and mini-boss arena. You'll face an elite version of the Parched Executioner called the "Thirsting Plunderer", killing it rewards you with 18369 Haze.

Retrace your steps to the entrance of the mini-boss arena, about midway, you'll find a huge wooden box in between the stairs, destroy the one that's on the left to find the Misty Ruins Key 4. You'll also find another Parched Executioner guarding a chest containing 1x Black Sword Gifts- after acquiring the fourth key, head back to the entrance mistle and use the keys to unlock the main boss arena.

The boss that's waiting behind the door is a variation of the Successor of the Throat called the "Wistful Wanderer", you can click on its name which is linked to the page to learn more about the strategies on how to defeat this boss - successfully defeating this boss rewards you with 34015 Haze, 2x Awake MJ310, and 2x Queen Titanium.