Depths: Archanid Grotto is a Location in Code Vein. This cavernous depths location is only accessible via the Depths exploration menu by talking to Davis, and players must obtain the Map: Arachnid Grotto first before speaking to Davis - to obtain the map, complete Gustav's quest by gathering intel during your first encounter of him at the Dried-up Trenches. After completing the side quest, head to the Accumulator Ruins at the Ashen Cavern and speak to him. 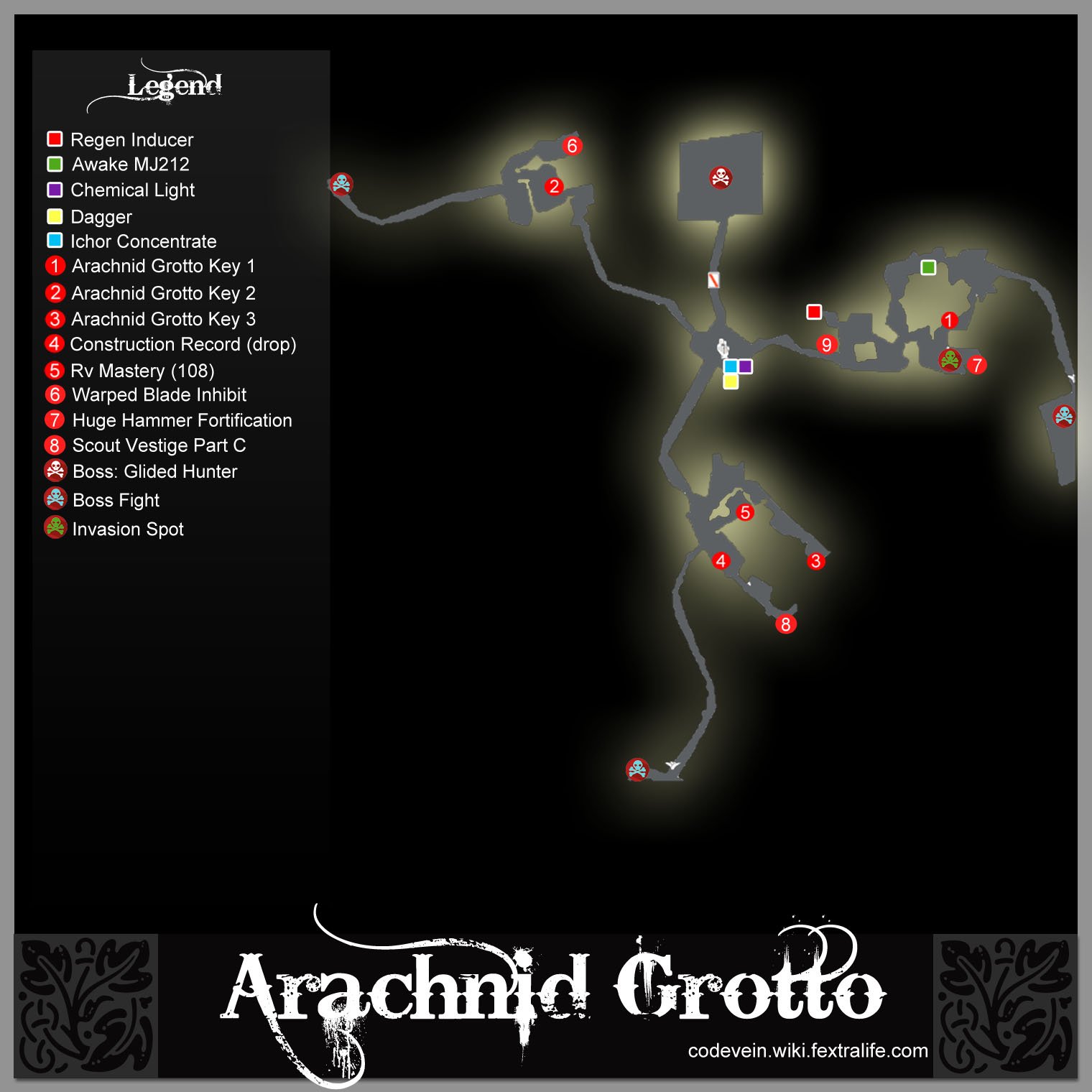 Upon arriving, obtain the loot that's by the supply bin right beside the mistle area. You'll find 20x Chemical Light, 5x Dagger, and 1x Ichor Concentrate. Activate the Mistle to map the surrounding area and you'll find three paths that you can take.

North Path from the Mistle

Take the north path first and you'll encounter a Spiked Executioner resting by the steps. Kill it then head up to where 2x Fire Totem Lost is, kill it and you'll find the Arachnid Grotto Key 2 on the ground. From there, you can drop down the path below where you'll see a Lost Dark Knight resting by the glass capsules - killing the enemy will have a chance to drop 1x Black Great Sword, you'll also find a chest containing 1x Warped Blade Inhibit behind the glass capsules.

From the chest, you'll find a path on your right that leads to a rotten mistle and a mini-boss arena. You'll face a stronger variation of the Lost Dark Knight called "Hunter in Black", defeating the enemy rewards you with 5778 Haze - after the battle, retrace your steps back to the Mistle and take the path that's on the west.

West Path from the Mistle

For this path, there will be a couple of enemies roaming around the area. First, you'll find as Lost Knight wielding an axe, kill it to obtain 1x Construction Record as well as 1x Loss Crystal (S). From where the Lost Knight was, go straight and you'll find another Spiked Executioner that's guarding a vestige, kill it then pick up the Scout Vestige Part C behind the enemy.

East Path from the Mistle

Next, while you're heading down the path, you'll encounter a Fire Totem Lost and 1x Red Spiked Executioner and a Spiked Female Lost Warrior will join in to attack you. About midway, there are two paths you can check out. Go right first to find the Arachnid Grotto Key 1, from where you got the key, drop down the path where you'll encounter two Female Lost Warrior guarding a chest containing 1x Huge Hammer Fortification - take note that approaching the chest will trigger the trial of blood

Then take the path to your left for now and you'll find a rotten mistle and a mini-boss arena at the end, purify the mistle then fight the mini-boss ahead. Here, you'll face a Stone-crusher accompanied by two Spiked Female Lost Warrior - defeating the mini-boss rewards you with 11030 Haze and drops a Queen Steel and Loss Shard (L) - after the battle, head back to the entrance Mistle and use they keys to unlock the door.

The boss that's waiting behind the door is the Gilded Hunter, you can click on its name which is linked to the page to learn more about the strategies on how to defeat this boss - successfully defeating this boss rewards you with 21883 Haze, 2x Awake MJ212, and 2x Queen Steel.