Area E-16 Ashen Cavern is a Location in Code Vein. Ashern Cavern is a location found underneath the Cathedral of the Sacred Blood, it is weathered with rocks and deep excavations that are filled with mutated Lost. 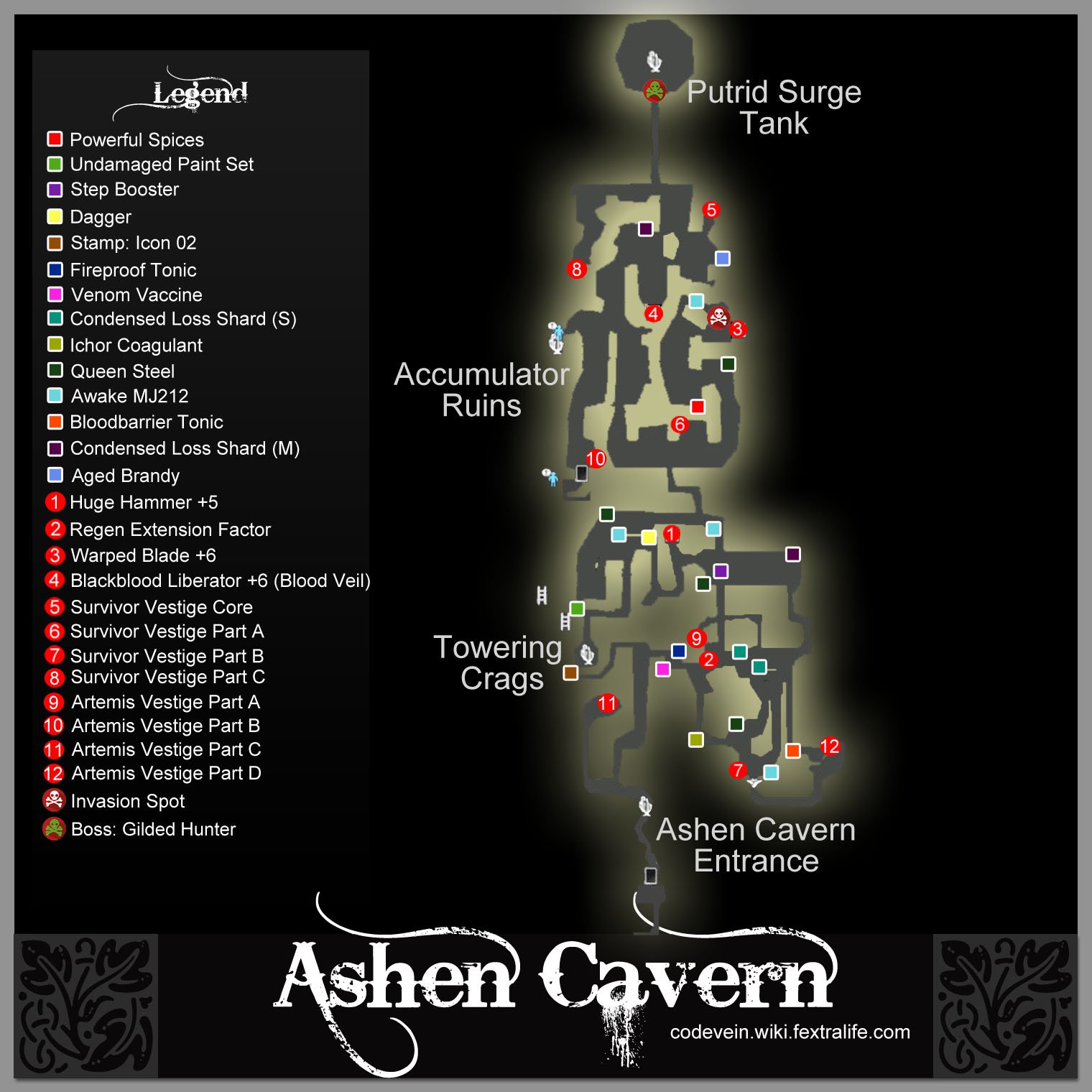 After defeating the Successor of Breath, Mia along with the group managed to save and restore Nicola's memory. In spite of their victory, Eva Roux, a hunter, reaches out to the revenants to help Jack Rutherford.

You'll begin your journey back at Home Base after completing Ridge of Frozen Souls. After the cutscene with the team and Eva, teleport via Home Base Mistle to the Gated Room Mistle at the Cathedral of the Sacred Blood. You'll find the winged door to your right which can now be unlocked, then ride the lift down to reach the cavern and the Ashen Cavern Entrance Mistle - activate the Mistle then go right to trigger a cutscene.

Before heading down the path Jack took, go to the other path first near the Mistle where you'll find 2x Spiked Female Lost Warrior guarding a Vestige, kill the enemies and pick up the Artemis Vestige Part C and a Queen Steel or Loss Shard (L) that may be dropped by the enemy - now, go back and catch up with Jack

Now, go proceed further into the cavern, pick up 2x Fireproof Tonic that's on the corner left-side and 2x Venom Vaccine that's on the right.

Go right and around the path where you'll encounter more Spiked Lost and a couple of Purple Blob that's hanging from the ceiling - before reaching the spot indicated above, you should be able to pick up a Queen Steel, 1x Awake MJ212, and another Loss Shard (L) on the ground.

Go straight from where the Purple Blob was and you'll reach a dead-end where you'll find the Artemis Vestige Part A - another Purple Blob will drop from above to ambush you once you get close to the Vestige.

Next, go back and go up to where you'll encounter 4x Spiked Female Lost Warrior. You'll want to kill the ones wielding a Bayonet Rifle before shifting your focus to the one wielding a halberd a shield - you can pick up 1x Condensed Loss Shard (S) at the corner edge.

There are two paths from where you fought the enemies, one on the left and the other to the right which will take you further into the cavern. Go right first and drop down to your left where you'll find another Vestige, the Artemis Vestige Part D right next to a Spiked Executioner that's waiting to ambush you - there's about two more that will climb up and another that's patrolling nearby, so be alert.

After you've defeated the enemies, go around the narrow path and you'll find a Rotten Mistle. Purify it to map the surrounding area and pick up the Survivor Vestige Part B next to it.

Now, head back down and this time take the path that's on the left from where you fought the group of Spiked Female Lost Warriors - you'll encounter another group of enemies here, make sure to pick up 1x Condensed Loss Shard (M) and another Queen Steel on the ground after you've killed the enemies.

Before you go left, make a right and you'll find a chest containing 1x Huge Hammer +6 - a Purple Blob will fall from above once you open the chest.

As you continue, there will be more Purple Blob that will fall from the ceiling to ambush you and a Spiked Executioner that's patrolling the area. You should be able to acquire a few Loss Shard (L) and a Queen Steel that are dropped by the enemy, as well as 2x Dagger and 1x Awake MJ212 that's on the ground near the flowing water - there are more enemies patrolling the area, so be cautious if you're exploring the area alone.

Now, from where you picked up the Awake MJ212, take the path that's on your left. You'll find 1x Undamaged Paint Set and the Towering Crags Mistle - activate it to rest and to map the surrounding area.

From the Mistle, head to the path leading up where you'll see 2 Spiked Executioners that are sitting around an item and a patrolling Spiked Female Lost Warrior, kill the enemies and pick up a Queen Steel.

Before going left from where you picked up the Queen Steel, continue going up until you reach a narrow path that's being guarded by a frenzied Spiked Female Lost Warrior, kill it, pick up 2x Step Booster and 1x Regen Extension Factor that's ahead.

Now, make your way towards the other section where you'll find yourself in an area filled with pointed structures. Just straight ahead, you'll find the Survivor Vestige Part A at the corner.

From where you picked up the vestige, go right and around the corner where you'll find 2x Spiked Female Lost Warrior wielding a Bayonet and 3x Rooted Lost - you'll find 1x Powerful Spices on the ground which is indicated on the image above.

Trial of the Blood

Now, from where you fought the Rooted Lost, if you go straight, you'll find a dead-end and a chest. Opening the chest containing 1x Warped Blade +6 will trigger the Trial of Blood. You'll have to fight a couple of waves consisting of Spiked Executioners and Spiked Female Lost Warriors.

After surviving the trial, retrace your steps back to where you found the Survivor Vestige Part A and head towards the other path where a Lost Knight is guarding a door. There will be more enemies ahead until you reach the Lost Knight- pick up the Artemis Vestige Part B beside the locked door. (you'll need Dog Tags to open the door)

Once that's done, go straight and make a left. You'll find the Accumulator Ruins Mislte just around the corner - activate it to rest and to map the surrounding area.

From the Mistle, go straight then make a right. You'll find a chest around the corner containing 1x Blackblood Liberator +6 - there will be 3x Spiked Female Lost Warrior around that spot that you'll need to fight.

Now, look at your map, you'll notice that there's a long narrow path which leads to a boss arena. Before you head inside, go around the corner near that path where you'll encounter 2x Spiked Female Lost Warrior and a Rooted Lost right at the edge. You'll find another Vestige, Survivor Vestige Part C behind the Rooted Lost - a Spike Executioner will climb up once you pick up the vestige.

Once you've acquired the vestige, proceed towards the crystallized path which leads to the boss arena - rest at the Mistle to replenish your health, Regeneration, or teleport back to Home Base if you need to make upgrades.

To learn about the strategies on how to defeat this boss, you can click here. Defeating the boss rewards you with 65660 Haze, Dark Knight Vestige Core and 1x Dog Tags.

A cutscene will then follow after the battle and you'll be ported into a memory - the Putrid Surge Tank Mistle will also be activated.

Rest at the Mistle then retrace your steps back to the Lost Knight guarding the locked door with the Dog Tags, you can now open it.

The path's pretty much straight forward, so keep going until you reach the next location, City of Falling Flame.