Zero District is a Location in Code Vein. This cavernous depths location is only accessible via the Depths exploration menu by talking to Davis, and players must obtain the Map: Zero District first before speaking to Davis - to find the map, after defeating the Queen's Knight Reborn at the Provisional Government Outskirts, take the path leading to the Provisional Government Center then climb down the ladder, you'll find the map there, you won't miss it. 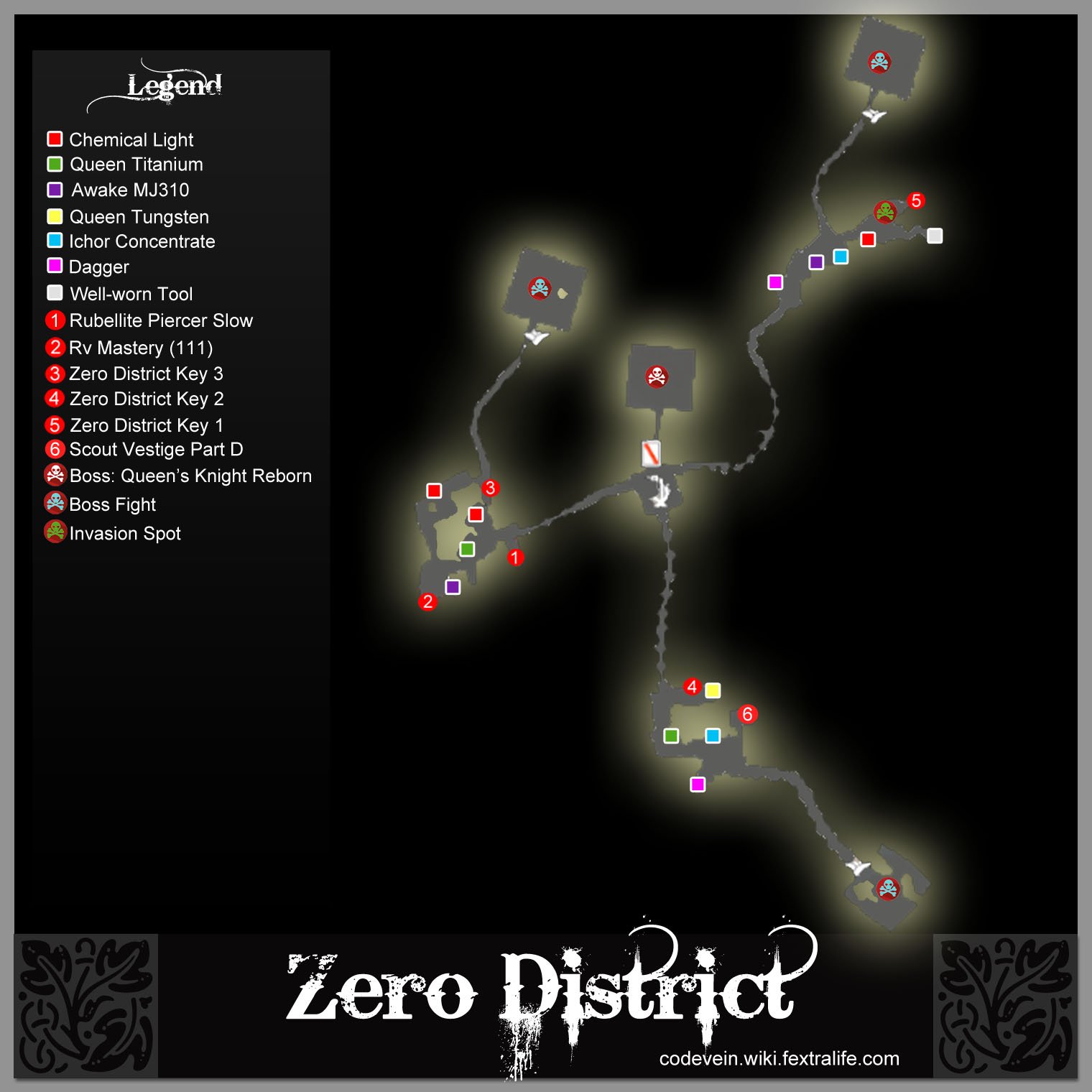 The Zero District is a depths location unlocked after obtaining the Map: Zero District found at the path leading to the Provisional Government Center. Players can talk to Davis to enter the area.

Upon arriving, activate the entrance mistle to map the surrounding area. Once that's done, take the path that's on your right where you'll encounter a Sunset Axe-Wielding Lost, kill the enemy and head down the stairs where you'll find a Mutated Hound - you'll find the Zero District Key 2 just next to the stairs and 1x Queen Tungsten at the end of the path.

Instead of going back to where the Mistle is, go up the stairs and make a left to find another flight of stairs, there's 1x Queen Titanium that you can pick up next to the stairs. At the top, you'll encounter another Mutated Hound and an Armored Female Lost, you'll find Scout Vestige Part D, 1x Ichor Concentrate, and 2x Dagger that you can find here. From where the Female Lost was, head toward that path and you'll find a rotten mistle and a mini-boss arena at the end.

You'll face two strong variations of the Armored Female Lost called "Queen's Vanguard Reborn", successfully killing them rewards you with 27,472 Haze - after the battle, head back to the entrance Mistle.

Once you've returned to the entrance Mistle, rest then take the path where you see red lamps. About midway, you'll encounter an Axe-wielding Lost to your left, kill it for a chance to acquire 1x Old-world Materials. Continue going straight until you find a Stone-Crusher that's accompanied by 2x Bayonet-wielding Lost, kill the enemies then loot the section for 2x Dagger, 1x Awake MJ310 behind the wooden boxes that's next to the military vehicle, and 1x Ichor Concentrate behind it.

After acquiring the items, you'll notice another path that has red lamps at the sides, head towards that path and you'll find another rotten mistle that needs to be purified and a mini-boss arena. Here, you'll face two strong variations of the Stone-Crusher called the "Raging Noblewoman", successfully killing them rewards you with 27,472 Haze and drops 1x Queen Titanium.

Next, go back then proceed towards where the Armored Female Lost, there's a corner to your left where you'll find red lamps again. You'll find the Zero District Key 1 there, but once you pick up the item, the trial of blood will trigger. Surviving the trial rewards you with 1x Pure Blood and 2x Solid Loss Crystal (L) - after surviving the trial, head back to the entrance mistle and take the last path to find the next key.

Upon reaching the next section, look to your left, just by the red lamps where you'll find a chest containing 1x Rubellite Piercer Slow while to your right, you'll find 2x Mutated Hound guarding an item. Kill the hounds and pick up the item to obtain 3x Chemical Light.

Continue straight and head down the stairs where you'll encounter an Axe-wielding Lost, kill it then pick up the item that was next to the enemy to find 1x RV Mastery (111). Next, head towards the path that's on the right where you'll encounter a Sunset Axe-Wielding Lost and a Stone-Crusher, at the end of the section, you'll find the last key, Zero District Key 3 and a rotten mistle, as well as a mini-boss arena where you'll face a stronger variation of the Axe-wielding, Lost called the "Euphoric Soldier" - killing the mini-boss rewards you with 49,952 Haze and drops 1x Awake MJ310

Once you have all the keys, return to the entrance mistle and use the keys to unlock the door.

The boss that's waiting behind the door is the Queen's Knight Reborn, you can click on its name which is linked to the page to learn more about the strategies on how to defeat this boss - successfully defeating this boss rewards you with 52,025 Haze, 2x Awake MJ310, and 2x Queen Tungsten.