Depths: Rocky Ruins is a Location in Code Vein. This cavernous depths location is only accessible via the Depths exploration menu by talking to Davis, and players must obtain the Map: Rocky Ruins first before speaking to Davis - the map is is given by Richard at the Natural Cavern Depths of the Ruined City Underground after activating the Provisional Government Outskirts Entrance mistle. You'll need to finish the side quests of the quests for the Self-Important Revenant, and get his final dialogue about the shelter after an area reset, before speaking to Richard. 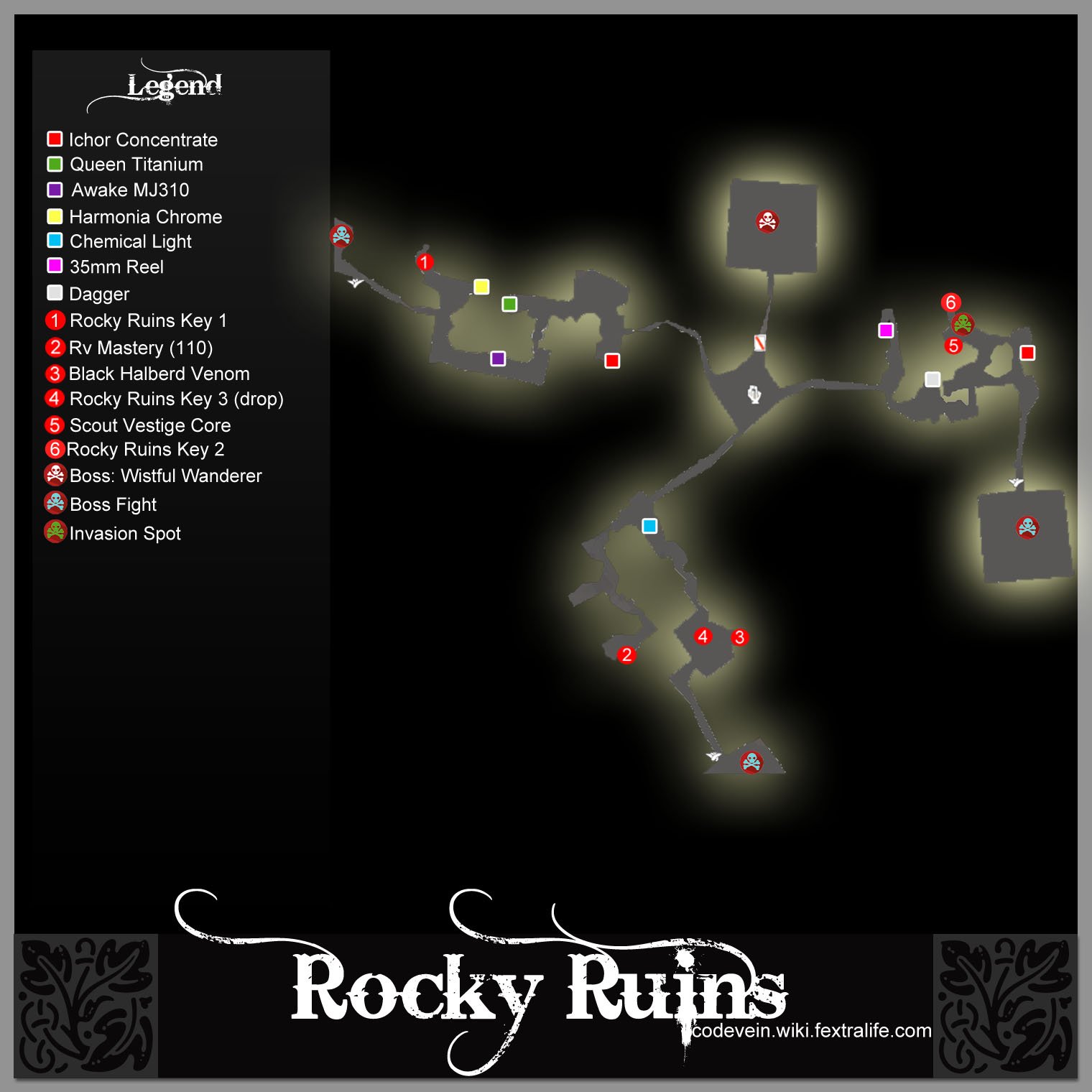 The Rocky Ruins is a depths location unlocked after obtaining the Map: Rocky Ruins which is given by Richard at the Natural Cavern Depths of the Ruined City Underground. However, you'll need to finish the side quests of the quests for the Self-Important Revenant before speaking to Richard.

Upon arriving, activate the entrance Mistle to map the surrounding area. For this dungeon, you'll need to find three keys to unlock the door of the dungeon's main boss. If you open your map, the arena is at the north side and three paths you can take from the south, east, and west. Once you've activated the mistle, take the east path first.

For this path, you'll encounter a Parched Executioner blocking the path ahead. Head up the stairs then go around towards the right where you'll find a rotten mistle and a mini-boss arena at the end. You'll fight a group of Fire Totem Lost and a stronger variation of it called the "Buried Fool" - killing the one in the middle will automatically kill the rest of the enemies around it and rewards you with 8160 Haze.

After the battle, retrace your steps and investigate the section where you'll find a Scout Vestige Core guarded by a White Ant-Type Executioner. And just around the corner, near the vestige, you'll find the Rocky Ruins Key 2 which triggers the trial of blood once you pick up the key - surviving the onslaught rewards you with a Harmonia Chrome and Solid Loss Crystal (L), head back to the entrance mistle after completing the trial.

Upon arriving at the section at the southern path, go left where you'll find 2x Chemical Light below and a Parched Executioner patrolling the area. Kill the enemy and keep going straight until you find a White Ant-Type Executioner. Kill it to acquire the Rocky Ruins Key 3 then open the nearby chest to obtain 1x Black Halberd Venom.

Now, you can go back to the entrance mistle, but if you continue further from where the chest is, you'll find a purify rotten mistle and a mini-boss arena at the end. You'll face an elite parched executioner called the "Dust Cloud Bandit", killing it rewards you with 12247 Haze - after the battle, head back to the entrance mistle and find the last key

Next, for the path that's on the west, the first thing you'll see is a group of Mutated Lost sitting around a lit barrel. Then as you continue, you'll encounter two Fire Totem Lost and Parched Executioner. Kill the enemies then continue going straight until you find another rotten mistle and mini-boss arena where you'll face a group of Sand Blob and two elite versions called the "Grime Mass" - focus on the two elites to quickly eliminate the rest of the enemies once they're defeated - killing them rewards you with 11424 Haze and drops 1x Loss Shard (L) and 1x Leak Vaccine.

Retrace your steps, and from the entrance of the arena, go left where you'll find a White Ant-Type Executioner, kill it obtain the Rocky Ruins Key 1 - now, head back to the entrance mistle and use the keys to unlock the arena of the main depths boss.

The boss that's waiting behind the door is a variation of the Successor of the Throat called the "Wistful Wanderer", you can click on its name which is linked to the page to learn more about the strategies on how to defeat this boss - successfully defeating this boss rewards you with 34015 Haze, 2x Awake MJ310, and 2x Queen Titanium.