Depths: Den of the Dead is a Location in Code Vein. This cavernous depths location is only accessible via the Depths exploration menu by talking to Davis, and players must first procure the Map: Den of the Dead, found at Ruined City Underground - Outer Crossroads Mistle: Go into the hallways towards the next game area, keeping an eye to your left. The map is by a corpse of a large Lost. 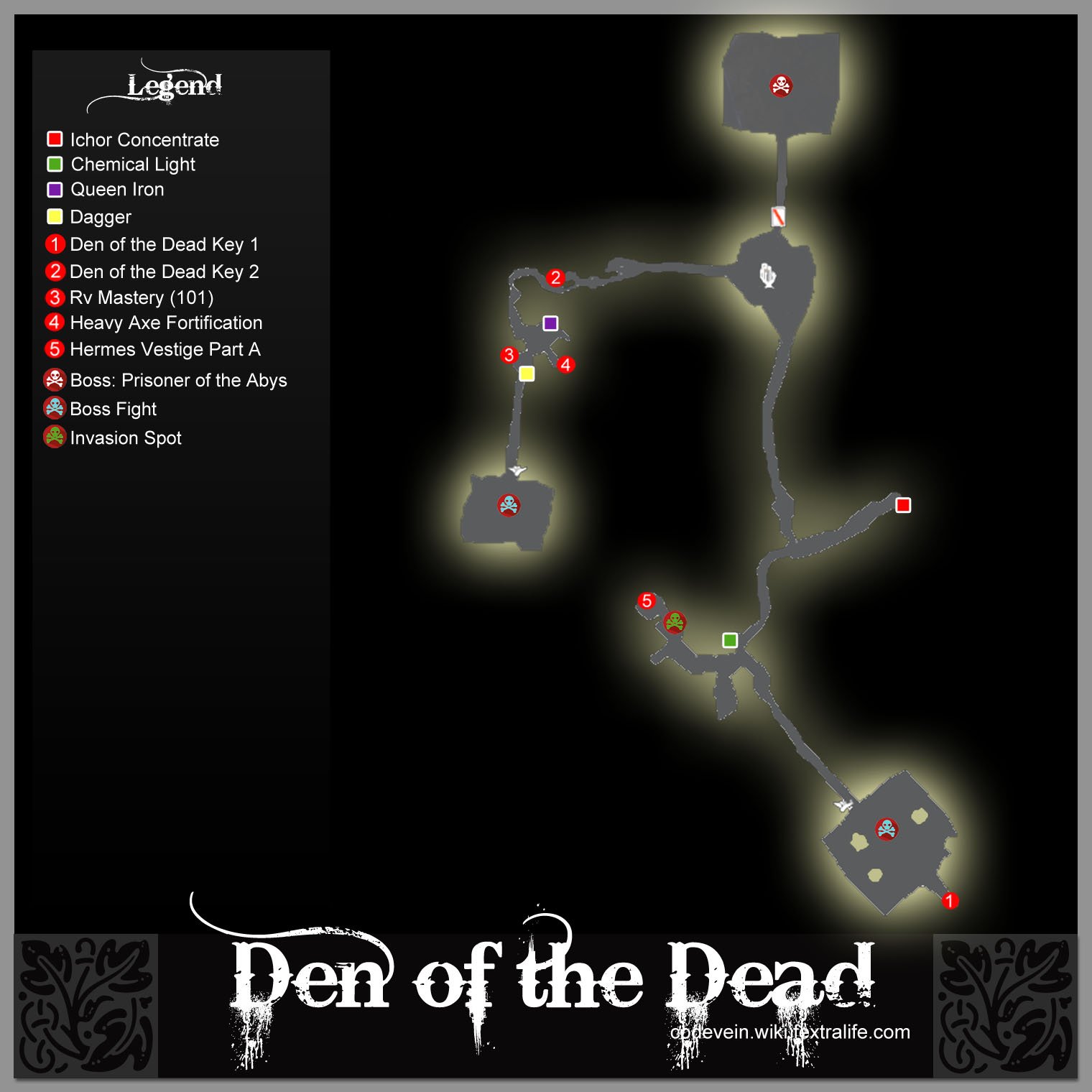 As soon as you enter the area, you should activate the mistle nearby. You can then check the door, that is locked and requires Den of the Dead Key 1 and Dead of the Dead Key 2. There are two paths to explore, so select a way to go and move forward.


Right of the mistle

Taking the right path from the mistle will bring places to face off against a Sword-Wielding Executioner Type Lost. Immediately after defeating it, the Den of the Dead Key 2 can be picked up.

Onward, you'll encounter 3 enemies. in a small junction. Defeat them and loot 1x Heavy Axe (Fortification) from a nearby chest.

A shining object nearby is RV Mastery (101) - it grants the passive gift "Tenacious Fang" regardless of blood code. Ahead, you'll pick up 2x Dagger and move map the area by purifying a rotten mistle. By the mistle you can confront the boss: "Shamed Thrall" that is just a boss version of 3 regular lost.

Left of the Mistle

Take the opposite way and defeat an Executioner type lost and pick up some Ichor Concentrate. The other path will lead you to 3x Chemical Light. A group of 3x Purple Blob awaits ahead. Past the blobs, an Invasion will play out, yielding Condensed Loss Shard (S) and some drops from the enemies.

After they are defeated, make sure to pick up Hermes Vestige Part A from a corner ahead of the ramp.

Backtrack a bit to where you picked up the Chemical Light and take the other path. It will take you to a rotten mistle, and a boss made up of Executioner-type enemies called Snout Wanderer. Past the bosses, you can pick up Den of the Dead Key 1.

Use the keys to open the door to the boss, that has the same moveset as Oliver Collins.