Depths: Cliffs of Rust is a Location in Code Vein. This cavernous depths location is only accessible via the Depths exploration menu by talking to Davis, and players must obtain the Map: Cliffs of Rust first before speaking to Davis - to obtain the map, complete the side quest of the Self-Important Revenant whom you'll encounter after defeating the Butterfly of Delirium and revisiting the Parking Garage of the Ruined City Center, then speak to him again at the Decayed Ship Interior of the Dried-up Trenches to acquire the map. 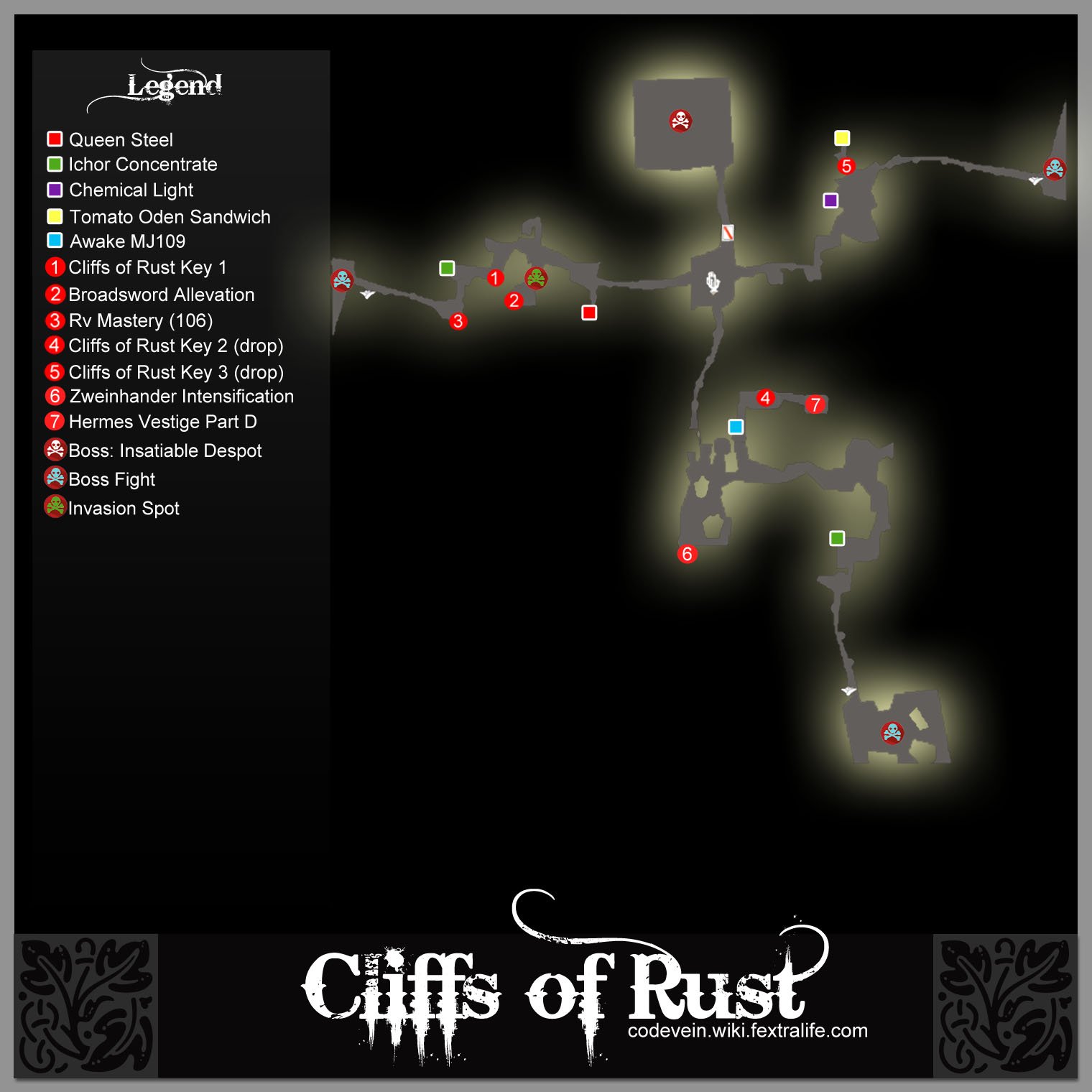 The Cliffs of Rust is a depths location unlocked after obtaining the Map: Cliffs of Rust from the self-important revenant. Players can talk to Davis to enter the area.

Upon arriving, activate the entrance Mistle to map the surrounding area. There are three paths that you'll have to explore in order to get three keys, first, take the path that's on your right. The first enemy you'll encounter here is a Spiked Lost wielding a bayonet rifle. The Cliffs of Rust Key 1 can be obtained from a Spiked Lost that's sitting at a corner, kill it to obtain the key.

From where you got the key, you'll also find 1x RV Mastery (106) and a rotten mistle and mini-boss arena at the end where you'll face an elite version of the Spiked Lost. Killing it rewards you with 1284 Haze - after the battle, go back to where you found the first key and investigate the section, you'll also find a chest containing 1x Broadsword Alleviation which also triggers a trial of the blood once you open the chest. Once you're done, you can head back to the entrance mistle and take the next path.

Next, take the path that's lit with red lamps. You'll encounter more Spiked Lost and a Sword-Wielding Executioner here, there's also a chest containing 1x Zweihander Intensification. To find the second key, investigate the section and look for a Sword-Wielding Executioner, that enemy is found at the corner left part of the map alongside a couple of Fire Totem Lost, where you'll also find a Hermes Vestige Part D. Once you've found the enemy, kill it and it will drop Cliffs of Rust Key 2.

For the third key, the Cliffs of Rust Key 3, it's found at the last path next to a Fire Totem Lost. You won't miss it since it's along the way once you encounter the enemy - once you've found the last key you can head back to the entrance mistle and use the keys to unlock the main boss arena.

The boss that's waiting behind the door is the Insatiable Despot, you can click on its name which is linked to the page to learn more about the strategies on how to defeat this boss - successfully defeating this boss rewards you with 2376 Haze, 2x Awake MJ109, and 2x Queen Steel.