Depths: Silent White is a Location in Code Vein. This cavernous depths location is only accessible via the Depths exploration menu by talking to Davis, and players must obtain the Map: Silent White first before speaking to Davis - to obtain the map, complete the Depths: Swirling Flood then speak to Shang at the Outer Crossroads of the Ruined City Underground. 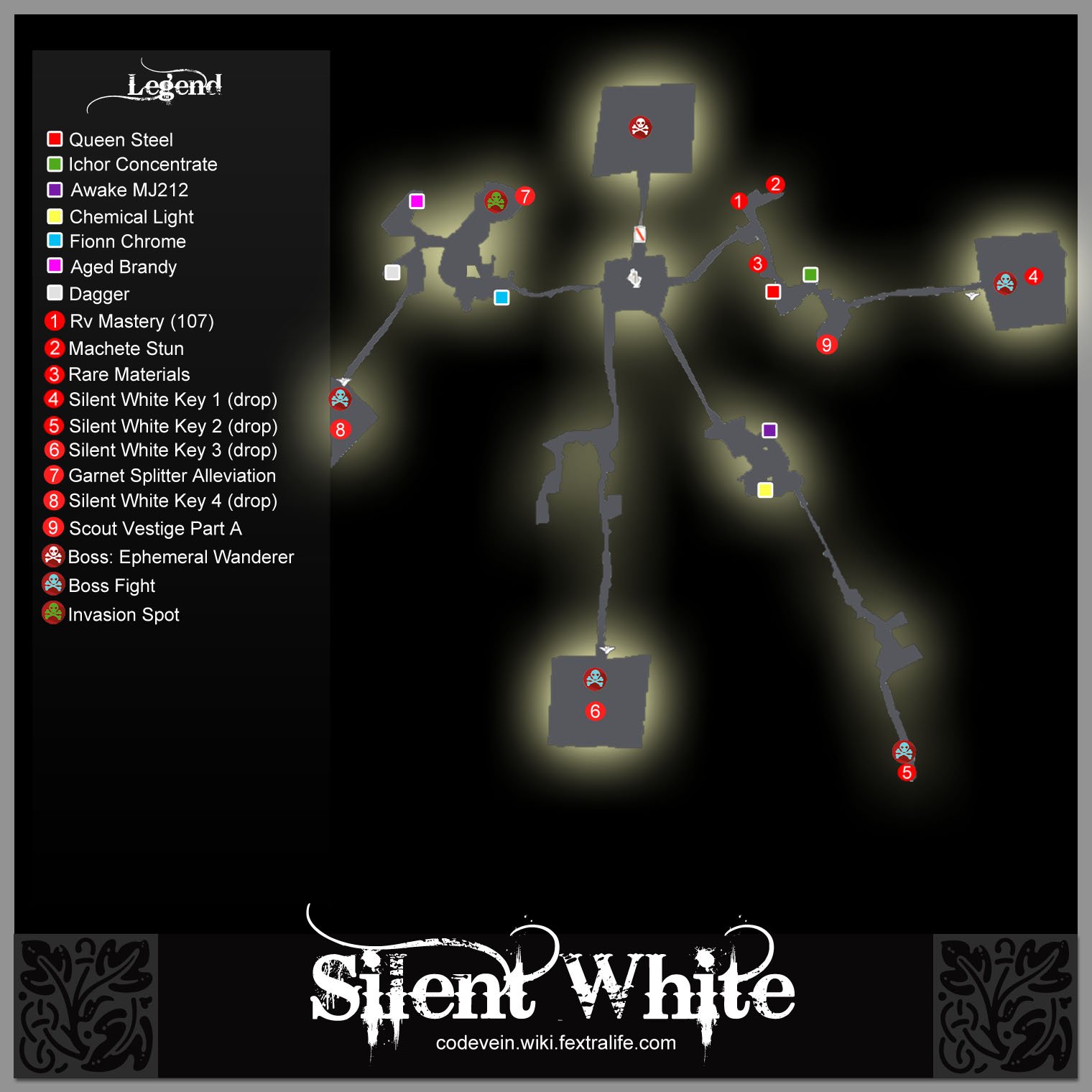 The Silent White is a depths location unlocked after obtaining the Map: Silent White given by Shang after completing the Depths: Swirling Flood. Players can talk to Davis to enter the area.

Upon arriving, activate the Mistle to map the surrounding area. You'll notice that there are four paths that you need to explore in order to find the keys. From the map, take the path that's on the farthest right side. Head up the stairs then pick up 1x Rare Materials behind the vehicle. Proceed further and you'll face 2x Sword-wielding Lost and a Brute Executioner, there's a Queen Steel and Ichor Concentrate that you can pick up. Kill the enemies and then pick up the Scout Vestige A that's on the right side, also, make sure to find the RV Mastery (107) here and a chest containing 1x Machete Stun.

Next, head towards the narrow path where you'll find two lamps at the side of the entrance. You'll find a rotten mistle and a mini-boss arena where a Boreal Savage and 2x Mutated Sea Urchin is waiting, killing the enemy rewards you with 5185 Haze and drops the Silent White Key 1 - head back to the entrance mistle and take the next path.

For the second path it's pretty much straight forward, you'll encounter a Brute Executioner and 2x Bayonet-wielding Lost. Kill the enemies then continue forward until you reach another rotten mistle and mini-boss arena at the end. Here, you'll face another Brute executioner called the "Boreal Brute", kill it obtain 5762 Haze and the Silent White Key 2 - after the battle head back to entrance mistle and take the next path.

Now, the third path is again, straight forward which leads the next rotten mistle and mini-boss arena at the end. You'll face two more of the "Boreal Brute" and successfully killing them rewards you with 11524 Haze and the Silent White Key 3 - now, make your way back to the entrance mislte and go to the last path to find the fourth key.

Next, for the last path, you'll encounter a group of Mutated Lost. Once you've cleared out the enemies, go left and you'll find a path that leads to the last rotten mistle and the mini-boss arena. Kill the two Boreal Savage to obtain 5762 Haze and the Silent White Key 4 - you can now head back to entrance mistle and use all four keys to open the arena of the main boss.

The boss that's waiting behind the door is a variation of the Successor of the Breath called the "Ephemeral Wanderer", you can click on its name which is linked to the page to learn more about the strategies on how to defeat this boss - successfully defeating this boss rewards you with 48020 Haze, 2x Awake MJ212, and 2x Queen Steel.