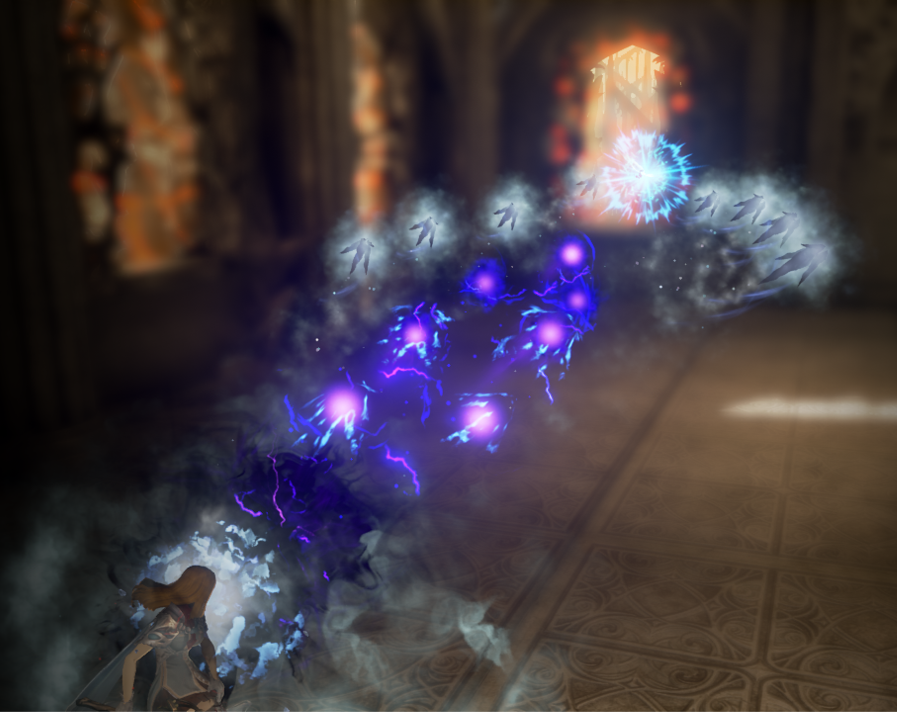 This is a player-created build, done on the latest patch of the game.
Created by Rashtor Nesmarck

This build was made with the purpose of having a way for light-based builds to contribute some damage with gifts. Please take in mind that you will still engage at melee combat (explanation in the basics section), but your main source of damage will be with gifts, making you a close-combat caster. We will use the barrage-type gifts for this purpose. If you want to just skip to the setup, go to the bottom of the page. This build also puts you on course with the Normal or True End, in case you're worried about obtaining an specific ending.

There are actually two setups for this build, one suited out better for exploration and another for boss fights (which has two variants). Most of these gifts (and blood veils) are acquired mid-game or late-game, but luckily don't need any DLCs. But first, we'll cover our equipment and the basics behind the build.

Warning: Barrage spells flash whenever they hit a target, and they can hit up to 9 times. If you have seizure problems due to flashing lights, turn back from where you came.

While any weapon with fast attacks is fine, Queenslayer Blade with Artemis (Devour) transformation is an option that you will have most of the game. We will want to be at melee with a fast attacking weapon because:

Noble Silver and/or Ivory Grace are late-game blood veil options for Light-based (Noble Silver) or Mixed (Ivory Grace) casters. They don't provide much in the way of defense, but they are very light, allowing you to reach quick mobility easily. Alternative options when starting out are the Queenslayer Thorn (which is more defensive-oriented) and the Prayer Shawl (which is more balanced).

The alternative weapon, Iceblood, is more lighter, which allows you to reach quick mobility when using the Noble Silver (Ivory Grace reaches quick mobility with both weapons). However, Iceblood can't be used by the Ishtar Blood Code (at least not innately), while the Isis Blood Code can. Whether you want to focus on drain rating, or weapon damage in this case is up to you.

Isis Blood Code can be obtained as soon as you finish the Cathedral of the Sacred Blood (with all the vestiges restored), and has a balanced statspread that allows for diverse gifts. Ishtar is found much, much later into the game, two areas before the end, but is marginally better since it has more fortitude (stamina) over Isis. The main difference would be that Isis has more Dexterity but less Strength than Ishtar, and has balanced Willpower and Mind.
You could also use both blood codes for similar variations of the setups listed below on the bottom, and change when needed/desired.

Our primary means for dishing out damage are the barrage-type gifts. Even when nerfed (apprently they hit harder before), these gifts deal good damage at close range, and scale with our Mind stat (being light-based gifts). More importantly however, is that this line of gifts can stagger and have low cooldowns, making it very spammable even without increased gift speed. Their downside is of course, their low range and wide spread, making them unsuitable for long distances (Long range combat options are available on the setup section).

I will list all the options below, along the reason of them being there. None of these have priority over the other, it's just a comprehensive list.
Some of these pasives requieres you to be on the path to the normal end (these are the ones that are on italic letters). If you don't care about that and just want to build yourself the most optimized way possible, go ahead and grab them.

This setup takes in mind that you do not have any increase in gift speed, which allows for the cycling of two barrage spells, and attack or dodge once. This narrows the barrage choice of spells, which helps against bosses with multiple elemental resistances. The buff gifts helps you to deal more melee damage with a decent amount of survival, and favors more high light rating. Please take in consideration that unless you use Cleansing Light + Blood Sacrifice, you can't completely buff yourself , save alloting Vow of Ichor as a passive.

This setup is more specific, and doesn't leave much room for flexibility in pasives. You'll want to stack your gift speed and all the damage you can muster, since you'll be less durable than wet paper. A wet paper that has to go melee against all sort of Lost. You get the point, kill them before they kill you, and never get hit. Since Ivory Grace is so light, you will be hitting quick mobility with any of the two weapons I suggested above, which will help your fragility by having superior dodge capability. Sadly, this build is unsuitable for bosses with wide elemental defenses, as your damage will be greatly reduced.

Now, as for why I put a communal gift, let's cover the effects; Blood Awakening has many downsides: Reduces your max Ichor, needs a partner (Mia) to cast (and it must be alive), reduces your physical damage by 50% and costs 24 Ichor to cast, unlike the other Communal Gifts who need 20.
In exchange, all your gifts have their Ichor cost reduced by 2, your cast speed increases dramatically, and all your cooldowns are reduced by half. When stacked with other gift speed buffs, you character can cast most gifts faster than their cooldown can recover, even with Blood Awakening's cooldown reduction. This can essentialy stunlock enemies to oblivion by the sheer amount of gift spam that you can dish out, making it a suitable candidate for the barrage gifts. It's a situational but powerful tool that benefits casters who know how to use it.
This of course doesn't mean you have to use it. In some cases it can be more detrimental to use, since it depends on who are you facing.

Drain rating becomes an important factor here, since we do not have the means to gain Ichor without going at melee. Stacking it really makes a difference, and Bloodsucking Blades abuses of the Ivory Grace Dark gift rating, boosting it to well past 1.0 Drain rating on most weapons.This however puts you more at risk than the previous setup, since you need to always stay at melee to recover ichor, deal damage, and spam gifts.

This is a setup that will carry you through most of the game. Ranged gifts, defensive buffs and Ichor sustain all in one Blood Code. The defensive buffs may be less useful as you go on to higher ng+ cycles (where you reach a point everything oneshots you), but by that point you should have learned how to deal with all the enemies in your path.

Pasives here can vary wildly depending on your needs, so don't hestitate to try more beyond the passive gifts I listed above. They will help your flexibility in this setup, more so if dabbling on stat increasing pasives.
As for the Blood Veils, they aren't by far the best ones for this build, but they can be used by almost any Blood Code and are more tanky, making them decent options to consider.